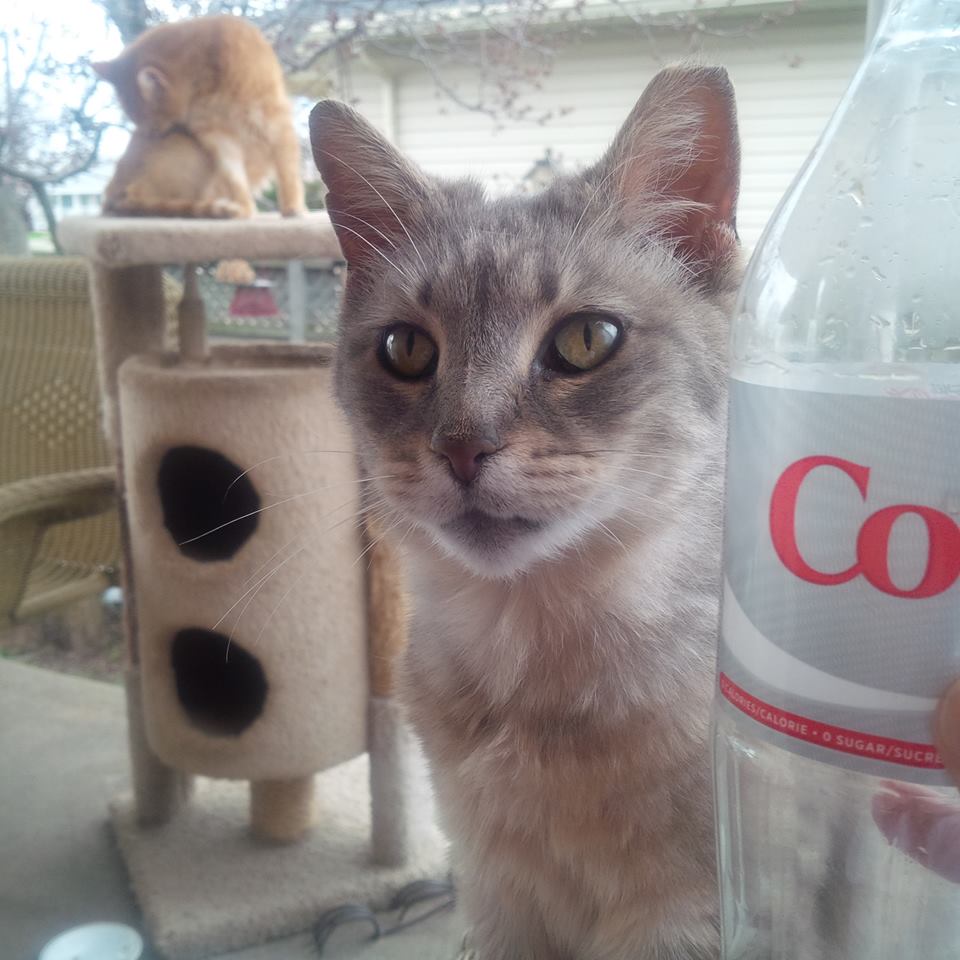 Angel came to me in the early Spring of 2011. There was snow on the ground, and there was bread under the tree for the birds. I noticed this little cat (assuming it was a kitten) trying to eat the bread. This saddened me, so I quickly got some sliced turkey or ham and broke it into little pieces and put it in a bowl. I went outside and slowly approached her while talking to her. She noticed I was carrying a bowl, but was too afraid to stay...so she took off down the driveway. She didn't go too far though, stopping underneath a parked vehicle. I placed the bowl down near the bread, making sure she saw me do it, and went back to the front door. I watched as she came back and gobbled the sliced turkey or ham down! She looked at me, as I was watching her, as if to say thank you. I went and grabbed the bowl (she took off down the driveway again) and put some more pieces of sliced meat in it. I placed the bowl down in the same spot again, and went back to the front door. She came back and gobbled the food down again. Her eyes looked like those of an angel, and she was so precious, I decided to name her Angel. This continued for a week or so, with her getting closer and closer to me each day. Finally I was able to pet her while she ate. She would get startled at first and back away...but then come back instantly. And in no time at all I was able to pet her while she ate, as well as before and after she ate. I have 2 indoor cats, with cat food available, so I started feeding her cat food instead of sliced meat, and she loved the cat food. As well as cat treats.

Then one morning I looked outside and I saw 2 little kittens with her. It was then I realized that even though she was little and young herself, she was a mom! When I brought food out to her she ate, while her 2 kittens (Sunshine and Boots) hid in the bushes and flowers in the flowerbed. When she was done eating, her 2 kittens would nurse off of her. The following day when I looked outside I noticed a 3rd kitten (Bandit)! As well as another bigger adult cat, who turned out to be the dad (Tigger). Angel was that trusting of me to feel safe enough to bring her whole family! I've never been one to want outdoor cats, specifically due to the dangers of living outside, but this all just "happened". So I got some cat towers for the kittens to play on (which they did instantly). With food I slowly worked on getting them, as well as the dad, to trust me as Angel did. After awhile I was able to pet the dad and the 3 kittens. A few months later, after the kittens were old enough, I got them all (along with Angel and Tigger) fixed and given their protective shots, with the help of a local cat organization. The rest of the summer and fall myself, as well as family members, would spend time with Angel and her family outside, petting and playing with them. When winter approached, I purchased a few dog houses to put in the front patio for the cats. I placed outdoor heated pet mats in each dog house, with cat beds on top of the heated mats. 5 houses for sleeping, 1 house for food, and 1 house for litter box. Angel and her family loved this and braved their first winter together in their heated dog houses. There was a bit of an adjustment to be made, as they had to learn they would receive their food in one of the dog houses as opposed to on the ground, especially in the dead of winter...but the adjustment was quick.

The following year, 2012, wouldn't be as good for Angel and I. The only male kitten, Boots, started to become a wanderer. And in May of 2012 he disappeared, never to return. Then in July of 2012, one of the female kittens, Sunshine, was hit by a car and killed. The loss of 2 of Angels 3 kittens was devastating and hard to handle. The family was now down to 3...Angel, Tigger, and Bandit. Over the next 4 years, from the summer of 2012 until spring of 2016 everything was good for Angel, Tigger, and Bandit. Lots of love, attention, and playing. Angel was so loyal to me, and so understanding. My indoor cats, one who is 16 years old, I bring outside on 20 foot leashes at least once a day in the summertime. Not once did Angel lash out at my indoor cats (even though she attacked any other cat that tried coming in her area)...she accepted them cause she knew they were mine. She was so respectful. And no matter the time of night or day, and no matter the weather (snow, rain, wind, cold), Angel would come to my truck when I'd pull into the driveway, just to greet me. I had never seen anything like it, she was always there to greet me, no matter what! She knew the sound of my truck. In the winter she'd walk through snow, including big drifts, just to get to my truck to greet me. She'd also jump into my truck when I'd open the door, and I'd pet her as she sat in my lap or explored the inside of my 1979 GMC or my 1976 Chevy. She was very special to me.

Then in February of this year, I noticed that she was slowly losing weight. I didn't know what was wrong or what to do, because she was still eating normal, if not more than she usually ate. I thought about the Vet, but Angel was afraid of people she didn't know, let alone being put in a cat carrier and taken on a truck ride. I wanted to spare her any possible stress. Also, my 16 year old cat has kidney disease and arthritis, so Vet bills are very high for me. I was hoping whatever was wrong would right itself. But by April, she had lost a lot of weight and was becoming weak. Even though she was still eating a lot. I researched her symptoms, accompanied with still eating a lot, and I came up with 2 possible problems. Worms is what I thought, intestinal worms. So I bought some medication at the pet store, natural medication that's safe for all cats, that is supposed to get rid of all worms. You just put drops on her food 3 times a day. I did this, hoping that it would help her and save her. But my effort was in vain, cause she continued to get weaker and on Wednesday May 11th, she passed away laying on her side in her favourite dog house. This broke my heart. It hurts so much, and it's hard to even write this...she was so special to me and meant so much to me, I wish I could've or would've done more. Angel was wrapped in a little blanket and I brought her in my truck for one last time to take her to Pets at Peace in St. Catharines. It was a very hard drive for me. Julie, at Pets at Peace, has been great, kind, and understanding. She is helping me to receive Angel's ashes, preserved inside a lovely urn, sometime this upcoming week...so I can bring her back home to stay. She will be buried with me when I die, because she means that much to me. I want to see her again when I leave this decrepit world.

Angel was an angel! She came to me in 2011, around the time my grandpa started showing signs of Alzheimer's and Dementia. I was very close with my grandpa, and I could barely cope with losing him before my eyes. But just like an angel, Angel came to me to help me cope and deal with my grief. My grandpa passed away on Sunday May 1st....and Angel passed away 10 days later on Wednesday May 11th. So it's almost as if with my grandpa's passing, Angel's work was done, and like an angel, she flew away. I love her and will never forget her. When I close my eyes, I see her pretty little angel eyes...the same eyes that connected with me that cold spring afternoon in 2011.