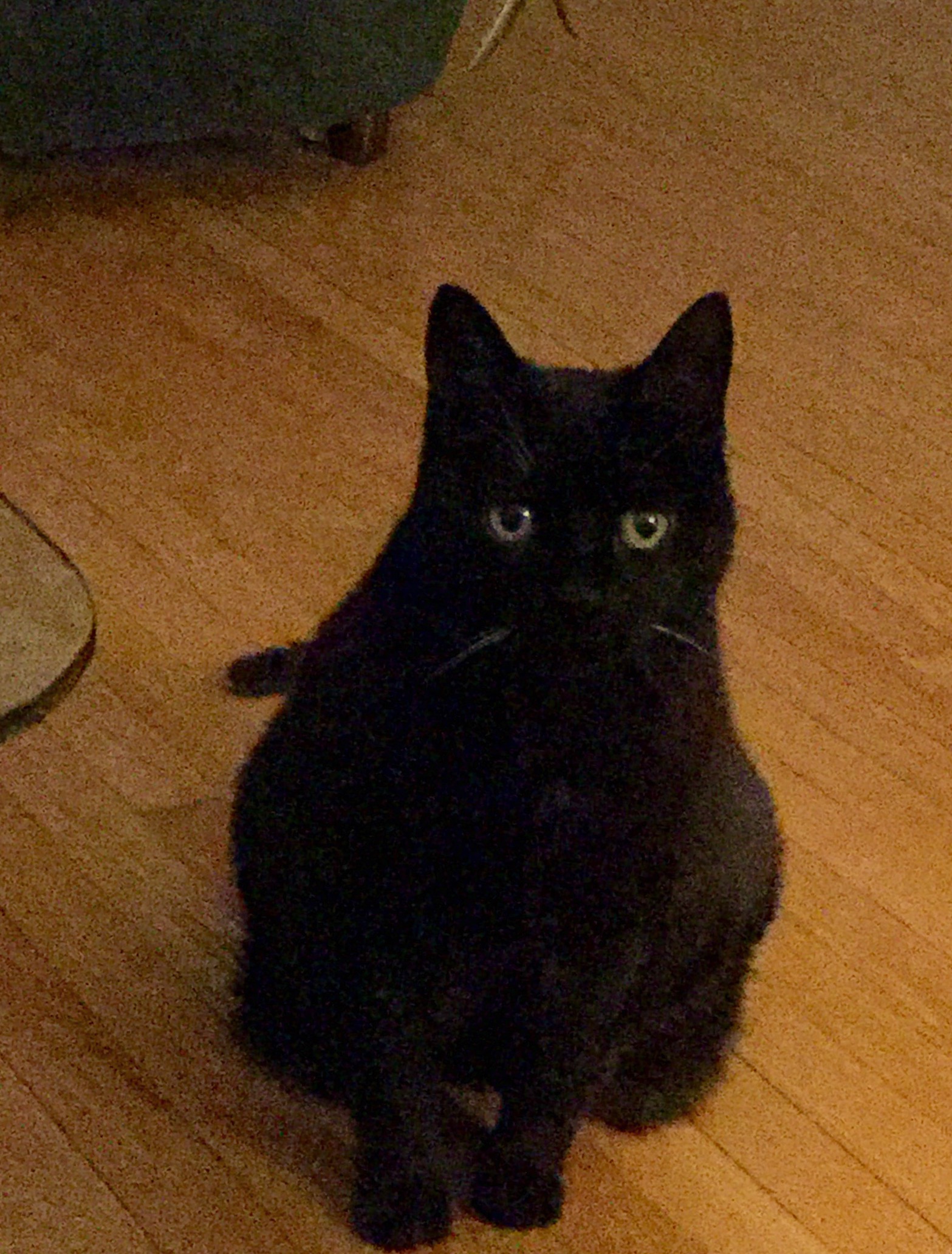 Stella's Story, as told by her beloved mom:

It was a warm day in June 1999, when a friend and I went to PetsMart in Kitchener to look around. I had no intention of getting a pet, as I had long work hours in Corrections, not really ideal for caring for a pet of any kind. I wandered back to the cat adoption room to take a peek at the kittens and cats, and read their stories. There were a few kittens that were adorable, but one was sneezing, so I was going to spend little time in that area. I heard a loud meow from the end of the row of cages, and had to see which cat was making such a fuss. I saw this beautiful black cat, already 4 years old, surrendered because her owners wanted to have a baby. She was noted as "difficult to adopt because of her age and colour." She was banging her head against the cage and meowing to get my attention. I had never seen such a pretty face! To get her to stop banging her head against the cage door, I asked if the staff could take her out for me. She immediately hugged me around the neck and was difficult to pull away from. I calmed her down and asked questions about her temperament and surrender, but felt that I couldn't provide her with a good life with crazy work hours. I left the store and told my friend that she was such a beautiful cat, and it was so sad to see her given up for such a flimsy reason. I thought about her for days, then decided that if she was still there, I would adopt her. Once all the paper work was in order and all necessary items were purchased, I decided to change her name to Stella. So started our long journey together.

Stella wandered around my apartment, found her food dishes and litter box, then laid on the living room carpet as if to rest after a stressful period. She was a communicator, and when she wanted something, she would tap me on the arm and meow at me, leading me to whatever she needed. She was initially allowed out on the balcony, so any time she wanted out, she would tap me on the arm, lick the door and meow. I got the message. If she felt that I wasn't responding fast enough to her need, she would head butt me, especially when I was on the phone too long. She could "talk" a mean streak. When I would get home late, I would be met at the door by a very cross cat, who would look angrily at me, and just by the tone of her meow, I knew I was away too long.

Every cat has different dietary needs, and very early on, I realized Stella loved eating Vaseline. In fact, I had to hide the small jar out of reach in the bathroom medicine cabinet, or she would get that thing open if it took her all day. She also had a penchant for eating toilet paper. But not before most of the roll was dragged down the hall or into her room. I quickly grew used to her wanting to eat and drink everything I did, including dipping her paw into my protein shake and licking it, or getting into my morning coffee if left unattended. I could easily share whatever I had, or I would get the laser stare until I did. One of her favourite foods was Baba Ghanouj. I've never seen a cat devour roasted egg plant dip quite like that.

Stella was extremely playful, and had her top toys that could delight her for hours. She loved to play fetch with her little coloured pompoms, and would bring them (and any other toy she could find) into the bedroom at night, placing them around my bed and meowing at me to get up and play. Mornings could be a hazard, as I would be stepping on and kicking toys across the room as I walked the mine field of Stella's playground. She was highly in favour of cat nip, so stinky fish, pillows, hearts, crinkle frogs and loose nip was scattered around the apartment. I asked the vet about how much a cat could love nip, as I frequently found Stella pushing the loose nip into a pile and then trying to grab it in her paws and rub it on her face.

Stella and I shared a transient life style as I changed careers from Corrections to radio in the late 90's, and moved us around Ontario as I moved up and down the dial. My audience knew all about my fabulous feline, as we could always seem to fit in a funny story in the afternoon about Stella's antics. She handled her stardom with grace and aplomb, appearing not to care that she was mildly famous in Toronto.

As Stella entered her senior years, she enjoyed excellent health, but slowed down a bit, and by the age of 17 became needy and a bit clingy. I was quietly delighted to have this aging senior with me, as she was never difficult to have around. All she wanted was to be close to me wherever I was. One day in July 2014, I noticed that Stella was unable to pee, checking her box, I saw nothing else there either. I rushed her to the vet, thinking it was a UTI, but told the vet she had been lethargic, and vomiting occasionally. The blood test came back that she had Chronic Renal Failure. I was devastated. I had to decide what route to take. The vet said that I could euthanize, get her a blood transfusion (which at her age of 19 would be very stressful) or do subQ treatment at home. While I read up on CRF, I knew that if there were still some good months ahead with treatment, I didn't want to end her life prematurely.

Our time together became even more precious because it was going to end sooner rather than later. In the initial treatment, Stella would just want to snuggle on the couch, laying beside me with her forehead pressed into my rib cage. My tears were frequent. But Stella became the one to comfort me when I would try to deal with her death. One day I had been laying in bed crying, and woke up to find her holding onto my wrist as I slept. When she had good days, she would crawl under the covers at night and place her head against my chest. After a particularly difficult treatment period, she crawled under the covers, put her head on my arm, and reached up and put her paw on my cheek. At times like these, giving her up became a constant battle between her quality of life and my desire to keep her with me. With her health in steady decline, by the age of 21, I knew there was a line I could see as the end, be it by euthanasia or natural death. In June, we had a few nights of cuddling that I just treasured. She would stay in bed as long as I would. Then came the night when she didn't come to bed. I got up at 4am to find her disoriented and having greater difficulty standing. I fed her by hand, and put her in her quiet place in the closet to sleep. That time had come, her mobility was failing, and her meds were almost too abundant, so I steeled myself to do what I dreaded doing. I gathered her favourite towel, her pink bunny, stinky fish, and two treasured pompoms, and made the trip to the vet. As I held her in the quiet room in my vet's office, I thought the tears would never stop. I always said that Stella was my heart, and I felt my heart break as I held her body. Parting after 17 years was like having part of me die. In time the tears will stop, the sweet memories will bring a smile, and gratefulness will replace the sadness. In time.