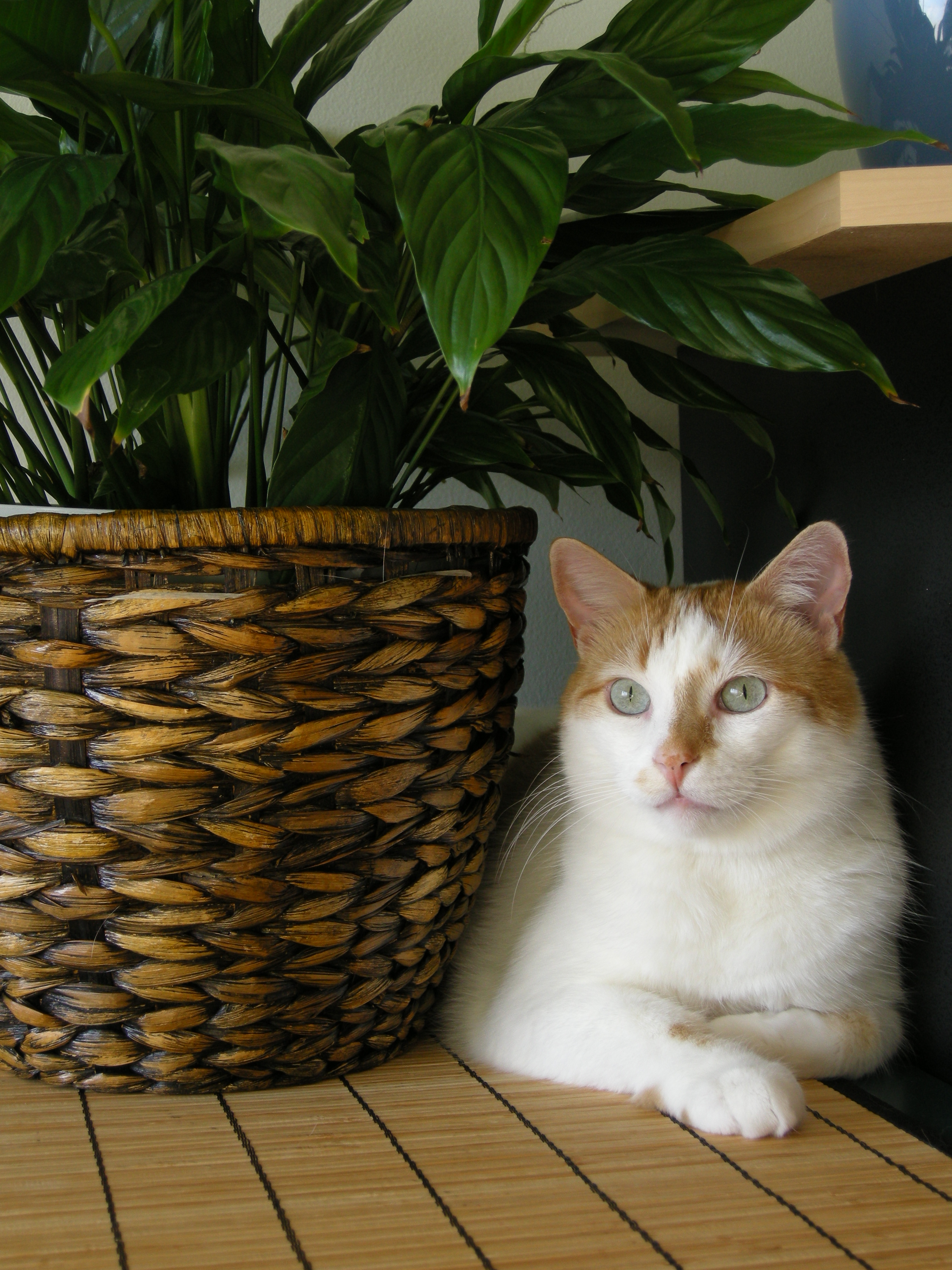 Mino was a witty little guy with a strong and free spirit. His mischief captivated me on the day (Aug 9, 2003) I saw him hopping here and there among a dozen of kittens brought to a pet store for adoption by A.R.K. Animal Rescue Krew from Lakefield, Ontario. I did not expect to adopt a cat that day, but found myself unable to leave him. Love at first sight! But still I called a very close friend of mine to come to the store for a second set of eyes. Feeling more drawn to the other kittens and a beautiful adult ginger cat, she attempted to convince me to change my mind. But when she saw how Mino just curled up sleeping in my palm like a little baby, she recognized that our bonding was inseparable, from a previous lifetime.

When we brought Mino home the next day with his other furry friend Mudita in a cardboard box, we heard much scratching noise in the back seat of the car. Without turning our head to look, we knew it was the white-orange little guy Mino trying to scratch his way out of the box into freedom. Yes! Here he was, poking his pinky baby nose out of the gap between the top folding of the box.

Mino, a (perfect) misspelling of minnow, was named after a character nicknamed Little Fish (小魚兒) in a famous Chinese martial arts novel, whose mischief was endless, and yet so endearing that one could never get too upset with him. He knew I did not want him and his flurry friend to jump to the kitchen counter. Every so often, however, I could hear a hmm-hmm sound calling my attention. As I looked around, here was Mino, standing on the kitchen counter, looking at me and making his small hmm-hmm sounds to tease me, and then hopped off.

Mino was a talker. He and I could go on in conversation back and forth hmm-ing; or I would speak in human language, while he meowed back. Overtime I learned his different messages behind the variation of his meow-language: a small endearing meow saying hello, a sweet lingering meow asking for food or a hug, a direct unwavering meow at a closed door asking to go out to the hallway or to go into the bedroom, a loud meow with a stern gaze demanding food when he had lost his patience. His eyes, as much as his meows, talked.

Mino was an amazing goalie at play. One of our favorite playtime before he grew mellow in age was him crouching down to get ready for a swift hop into the air stretching one of his front legs high up to hit the ball I was throwing at him, just like a soccer goalie guarding the goal net. And he never missed it!

Mino was often found looking at me intently with a soft gaze while I was working away at the computer or looking into the mirror getting ready to go out. He was tuning into my energy so deeply that he often knew exactly what I needed or was going through. One early morning coming home from the hospital after a close friend died, I was unable to sleep despite much fatigue. Mino came to the bed lying on my heart purring and later wrapping his front paws around my head, releasing the heaviness and exhaustion of my heart and mind and comforting me to sleep.

Indeed, the bed was our sanctuary where we shared countless intimate and comforting moments together. Mino loved to sleep beside me holding my hand tight with this front paws, never got tired of a gentle scratch of his chin and neck; or he would turn his belly up, asking for a tender rub of his belly, purring. It was a moment of his complete trust and my touch of deep love and gratitude for having him and his unwavering companionship in my life through the many joyful and trying times over the years. It was our simple joy of being with each other in this lifetime.

During the days when he was back from the hospital after his first episode of pleural and cardio effusion in June this year (2014), Mino was a living example showing me the true freedom of living in the present moment in the midst of or in the process of recovering from a serious illness. In one moment he could be hit by a severe cough attack. In the next moment when all was over, he would shake it off, walk around, ask for food or purr away beside me. In no way was he caught up in the last moment (of a difficult breath) or worrying about the next moment (of not being able to breathe). How freeing when we are fully living in the present moment not being caught up by the thought/story of the past or the future! Such a profound teaching that has taken me so many years to learn and practice! And I am still learning.

Mino taught me forgiveness and spacious presence. In the weeks when I was trying to support him with herbs after his hospital stay and later when he relapsed, I force-fed him daily with herbal medicine. He didnt like it, found his witty ways to escape the force-feeding, and yet still tolerated me. One time at the beginning of it all, I must have choked him with my unskillful force-feeding. He screamed and crouched down, breathing hard and fast While I was crouching down beside him feeling deeply remorseful for having hurt him, he was focused on what his body needed in the moment. Slowly his body returned to a calm state. Then, in no time, he jumped to our bed, lying beside me purring. He held no grudges against me, not as we human too often do to each other.

In the last two weeks of his life when lying beside me on his side in bed made it difficult for Mino to breathe, I moved to sleep in the living room with him where he could find a soft and comfortable spot on the back pillow of the couch. For days I struggled with the thought of euthanasia, while also sensing that Mino would decide on his own term, with his free and strong spirit. Indeed in his last moments while I was asleep in the living room, he chose to go back to the bedroom, jumped to our bed and laid down at the center. It was his (and our) sanctuary of love where he felt safe and comfortable to take his last breath, and rest fully, in peace.