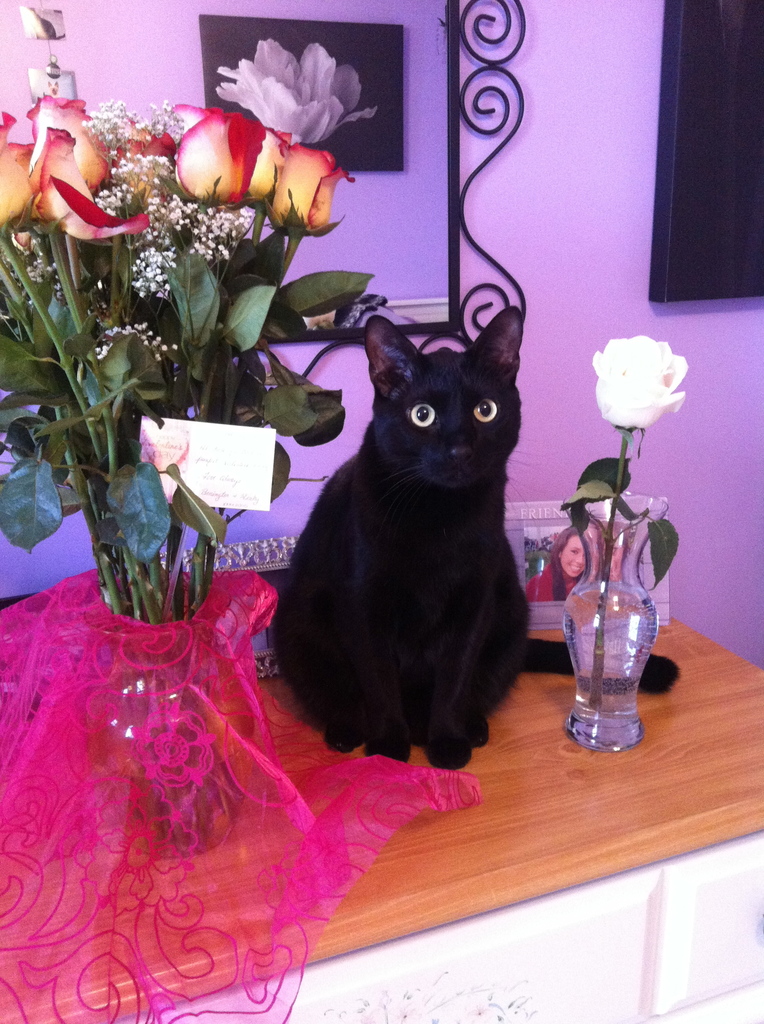 Ben was my guardian angel, protector, and best friend.

I was never thinking of adopting a cat, but on June 11, 2010 I saw this little black kitty who was a little bit shy and a little bit sad. He simply melted my heart and I knew at that moment that I had to adopt him. His name was already Ben so I decided to make it more distinguished and I re-named him Benington.

Ben flew with me to Vancouver that year to begin my journey towards completing my Masters degree. He was the one that made me feel comfortable living on my own in a different province. He was also the one who helped me get through a really tough year of anxiety and depression. He was my guardian angel.

After a year of flying back and fourth between Ontario and British Columbia, Ben had become quite anxious to leave the house. Although it was the toughest decision that I had to make, I decided to keep Ben at home in Ontario with my sister and parents for the remaining year that I was in school. They took such great care of him and would send me pictures daily. They also put up with me asking to Skype chat with Ben all the time.

I moved back home in April 2012 and was beyond excited to be reunited with my little Ben Ben. He even escorted me up to my room and followed me everywhere I went for the next year and a half. Ben was the one I would turn to when I was upset, scared, and frustrated. Ben was my protector.

When I had to move back to British Columbia for nine months in September 2013, I was again faced with the most difficult decision  leaving Ben at home and being away from him. Although I got to be with him for two months over Christmas and for a week during Easter, I missed him every day that I was away. I moved back home on July 10, 2014 for good and I could not wait to see my little monkey. It was the best feeling in the world to be with him again. Ben was my best friend.

Ben always knew how to make everyone laugh. He loved stealing straws out of our drinks, sunbathing wherever he could find a patch of sun, and running down into the basement whenever we opened the door. He was kind and gentle and taught us how to forgive. He was a nurse when we were sick and a bodyguard when we needed protecting. He loved to eat cereal with us, and he would wait in front of the microwave if we were making popcorn with the hopes of getting a few pieces when it was ready. Ben was a gentle giant. When he would catch mice, he would bring them to my mom and drop them into a bucket so that we could bring the mice to a field. Ben would squeak instead of meow, especially if he wanted a treat. Sometimes I was convinced that Ben was more similar to a dog. He would drool when you rubbed his cheeks, and he loved eating the handles of plastic shopping bags. Ben loved his adopted sister Kitty Minky. Even though he would push her off the couch to get a better view of outside, we would often catch him licking Kitty Minkys ears or cuddling with her on the couch. Ben was loyal and loved to love you. Most nights he would sleep at the end of my bed and sometimes he would cuddle beside my head to smell my hair.

Benington passed away unexpectedly on Thursday August 14, 2014. He was only four years old. While we are unsure what exactly happened, we know that he was not in pain, as he passed away peacefully in his sleep. Some people may not understand, but for me Ben was like my child. We had developed a bond that began when he was only eight weeks old. He got me through the last four years, and I truly believe that this is why I was blessed to have him in my life.

I think about you every day Ben Ben and I will love you forever and always.